I keep pretty detailed notes on wins/fails & have a running spreadsheet with some key KPIs that matter to me. Mainly, if something doesn’t hit as hard as the others, I try not to beat myself up. 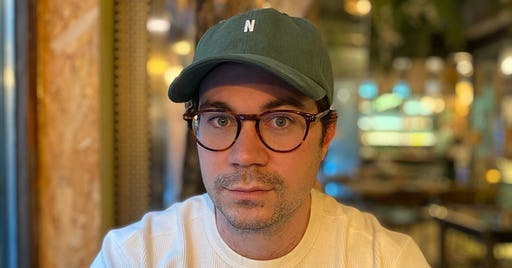 Kyle O’Brien has naturally gravitated towards econ/tech rabbit holes. He was particularly inspired by the up-and-coming newsletter crew — and thought, maybe he could take a stab at it. He built a loose business plan, gave himself a 6-month runway and scoured the internet for best practices for growing a newsletter audience.

What came out of this transition is a newsletter that allows him to explore global technology trends and how they manifest themselves in France.

Continue reading to see how Kyle has managed to start and grow his newsletter, Startup ROI:

Can you share with everyone how you thought through the decision of leaving a "traditional" job to fully focus on your newsletter?

That was definitely a tough choice. Around a year ago I joined Twitter and naturally gravitated towards econ/tech rabbit holes. I was particularly inspired by the up-and-coming newsletter crew — Packy McCormick (Not Boring), Mario Gabriele (The Generalist), Ben Thompson (Stratechery) — and thought, maybe I could take a stab at it... just have to find my niche (there are riches in niches as they say...).

I effectively built a loose business plan, gave myself a 6-month runway and scoured the internet for best practices for growing a newsletter audience. It’s still a little scary but each week I’m getting more & more feedback and have confidence that each milestone will bring new ideas and opportunities!

What are some of the most noticeable differences between the French and Bay Area tech ecosystems?

The biggest difference is“maturity” — simply put, there is more experience, density of talent, and role models in the Bay Area. But I think that’s shifting and as Silicon Valley becomes more of an ideology, it’s possible for awesome ideas/companies to start anywhere!

What is YOUR favorite piece that you've written?

My favorite piece has to be The 401K Meal Plan

What's your process for writing each piece?

The process appears to be ever-evolving haha (I’m still early on, roughly 3 months in). However, in general, it works like this:

Is there a person or publication whose work you read most regularly? why?

There are wayyyy too many good ones to choose haha. But I’d say my current faves are:

I read all of those pretty religiously!

Do you think that French / European startups are still at a competitive disadvantage due to stricter regulation (e.g. Uber, labor laws, etc) compared to the US or do you see a silver lining/ long term upside in that?

I can’t speak on behalf of the entire EU, but I would agree there are certainly some regulatory/cultural hurdles that make it difficult (in the near-term) to compete with the US.

With Brexit, France & Germany are the de facto leaders of “European Tech” and I think there is huge motivation for change. Macron, in particular, has positioned himself as a champion for the technology sector and has worked to implemented new policy that makes FR more attractive for talent, investors & businesses.

There’s a great quote from Macron where he basically mocks the EU’s GDPR policy as toothless (featured in my article on Digital Sovereignty here).

I think there is a huge asymmetry ready to be exploited in Europe. Lots of talent, a new generation of tech startups that have some role models from previous successes, and funding rounds coming from all over the world to support innovation in places where previously it was difficult to attract VCs.

So in short, my long-term outlook on EU (and especially French) tech ecosystem is bullish!

What has been the most challenging part of starting a newsletter? What was most unexpected?

TBH, for me, the operational stuff was the easiest (get a domain setup, build a lightweight brand, create a social presence, coordinate a content calendar/schedule). What’s hardest is actually sitting down to do the writing…

I find myself thinking about upcoming articles, doing research, chatting with entrepreneurs on a daily basis (i.e. the fun part). But it’s counterintuitively difficult to just sit down and put words on the page. I think it’s the fact that once you start, you know it’s going to be a long journey of writing/editing/writing again etc. Or maybe I just like the procrastinate.

I would say the other tough part is avoiding distraction & feeling pressure to always be producing something. Sometimes I get caught up on Twitter and think “how the F do these guys publish so much content.” But the reality is, I’ve got a small/loyal following and I’m going to grow slowly but surely. It won’t be an overnight success and in a way that’s a good thing. It means I’ve stayed consistent, maintained high quality, and earned an audience.

Most unexpected? My new found appreciation for social media. It’s easy to it write off as a necessary evil, but there is definitely and art + science to it. I’ve learned most of my engagement is through Twitter/LinkedIn so I optimize content there and really work to create bite-sized pieces that deliver value and hopefully entice interested parties to read more. Also, I’ve made so many Twitter friends. If you told me I’d meet several people IRL from Twitter interactions, I wouldn’t have believed you!

What are the most interesting developments in the French tech ecosystem that you haven't had a chance to write about yet?

I think France has a unique perspective on a few verticals that I’d like to explore further (and plan to in upcoming articles):

Outside of newsletters, are there other mediums in which you see creators innovating that excite you?

I’m a huge fan of podcasts/audio. In fact, that’s likely the next step for this project if I get enough traction. I think it’s a great way to consume content, especially deep topics where long-form is necessary (and reading isn’t always the ideal method)

Outside of that, I guess I’d say TikTok. TBH, I’ve been reluctant to download it myself but I get the sense that the algorithm has a built in bullshit detector i.e. authenticity is prioritized. If you can figure out the formula there, it seems to you can find not only a big but right-fit audience in a short period of time.

I also love graphic design/visuals so in a world where I could collaborate with someone will the requisite skill set, I’d love to make infographics or supplement essays with high quality visual frameworks.

Curious if you gave any consideration to starting podcast-first?

I came from the podcast world, so I have a little experience in this dept. I think from a discoverability standpoint. Search for podcasts is tough at the moment (though evolving) and there are just so many podcasts that it’s hard to find the signal through the noise (unless, of course you have an existing audience). Plus, I think it’s more time intensive + requires some investment (microphone, editing software etc.) to put together a high quality podcast.

So, long story short. I chose writing first to see if I get any traction at all. But I think the podcast has even more potential to connect with people & help grow an audience.

How do you think about the audience for your newsletter?

Before I launched I had an “imagined” audience persona and the data has, for the most part, reinforced my hypothesis. I have two key personas: (a) US readers in tech, investing, or generally interested in global/affairs economics and (b) EU readers, predominantly people who work for a French tech company & more broadly investors in the region. But it’s important, as you said, to really think about your audience. My content fuses together tech/macro-econ/french+american culture/humor/memes — so in theory it could attract any number of people. There will also be a division between regular readers & those interested in a particular article/topic. You’ve actually got me thinking here a little bit haha!

There are probably several more ways to breakdown audience (by dominant social channel, by role, by readership, by subscriber/non- etc.).

What experiments have you run to grow your audience?

I’ve run a few growth experiments and one that has been particularly successful. Since I write about tech, I tend to do lots of cold outreach to people that work at the company I’m covering. For the most part they are receptive and if I get someone high enough at the co, they will tend to RT or share on social which helps drive visibility.

In fact, I’ve gotten tons of screenshots from internal slack channels at startups with the VP of Marketing say “woah, cool article!” I come from a business development background so I’m comfortable with cold outreach, networking. Other than that, it’s primarily tweaking content for different social channels & working to collaborate with other newsletter writers who have a slightly bigger (or adjacent) audience!

What would you be doing if the internet didn't exist?

I think, had I not been turned onto tech startups in college, I probably would have gone a more traditional route (banking, consulting, business school, some “executive path” idk). I got an internship at Genius (formerly RapGenius) in college and lived with the founders in Malibu, CA for a summer and never turned back. The tech startup world was where I wanted to be. In an alternate reality I would love to be a “real” creative/artist or if you ask my 9-year-old self it was probably a pro soccer player (obvi didn’t make the cut!).

What does your workspace look like (feel free to drop a pic!)? What sort of tools do you frequently use to write your newsletter?

I just moved to a new apartment but have a fresh standing desk arriving next week (I’m hyped!).

My “tech stack” is fairly standard (I come from B2B SaaS background so all the usual suspects):

What do you do when a piece falls flat and doesn't seem to resonate with your audience?

I keep pretty detailed notes on wins/fails & have a running spreadsheet with some key KPIs that matter to me. So far, it’s only been 10 newsletters so the trends aren’t super comprehensive. Mainly, if something doesn’t hit as hard as the others, I try not to beat myself up.

Also, I try to evaluate other factors that may have contributed (in August, for example, everyone in France is on vacay…). But it’s also important to critique your own work and try and determine if there was an issue w/ the narrative or if my explanations weren’t clear or if there was a deviation from my typical promotion cycle via social etc.

You mentioned KPIs. Which do you measure yourself against?

All the standard newsletter metrics are important: Subscribers, Open Rate, Views/Article. I came up with my own metric in an effort to see if I was writing too many words haha and getting enough “Bang for my Buck” so to speak. Here’s my attempt at creating a unique KPI (image below)

But since I have multiple channels for publishing (Substack = main, but I have a website where I publish 1/2 of the article then add a CTA to substack, & i publish as LinkedIn article with same methodology --> driving everything to substack i.e. marketing funnel). So, I have some data on user journeys within my site & where people are coming from.

Another important metric is attributing not only where people are coming from but if they signup as a result. For example, I get most traffic from LinkedIn, but a higher conversion rate from my website.

For fun, I like to track countries where people are coming from just to see how international my reach is